Our last day in LA, Joe and I crammed in the Grove and the Farmer’s Market in the morning before our flight in the evening. 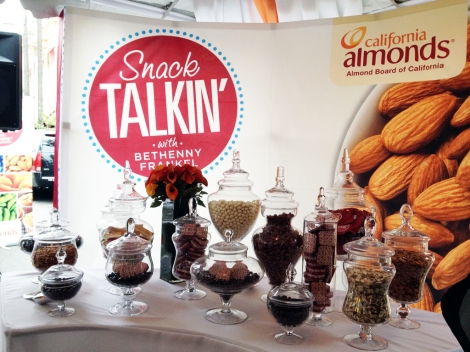 The Grove is full of shopping, your usual department stores and retail shops. Sometimes they hold events in the square and that day the Almond Board of California was out to promote healthy eating and was giving out almonds (of course!).

I was more excited to check out the Farmer’s Market. The original in LA, it’s been open since 1934. With a variety of vendors selling produce, meats and poultry, seafood, spices, there was a lot to take in. 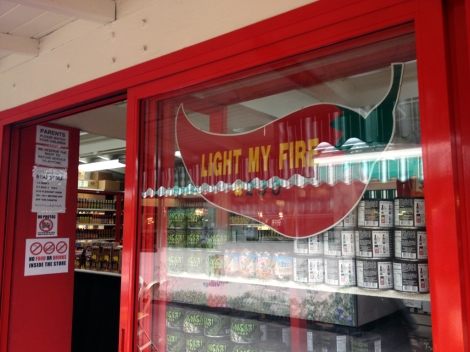 The most unusual shop was Light My Fire. If you get a chance, go visit. They sell every possible hot sauce imaginable! Ranked on a heat scale of 1 – 10, they were organized as such throughout the store. Spices and marinades were also available for sale.

When you started hitting the 9’s and 10’s, some of the bottles got quite humorous.

Joe, self-proclaimed sriracha lover, was a bit puzzled why sriracha wasn’t sold in the store. When we asked the owner, she claimed that she carries unique sauces and spices, products you wouldn’t find in your average grocery store. Most sauces in stores, such as tabasco and sriracha, rank between 5 – 7 on their heat scale. It’s a heat lover’s galore! I unfortunately had zero space in my luggage and didn’t want to risk hot sauce spilling over all my clothes, but I did manage to grab a Habanero spiced popcorn packet to try! 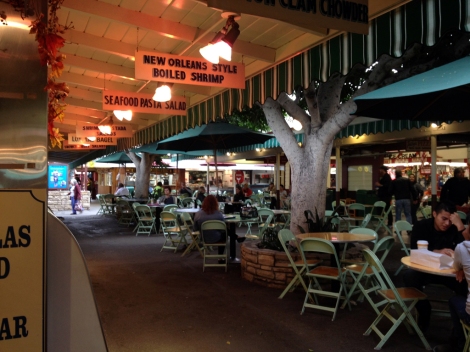 There was surprisingly a large amount of vendors actually selling food, ready to eat, most of which were in the center of the market. 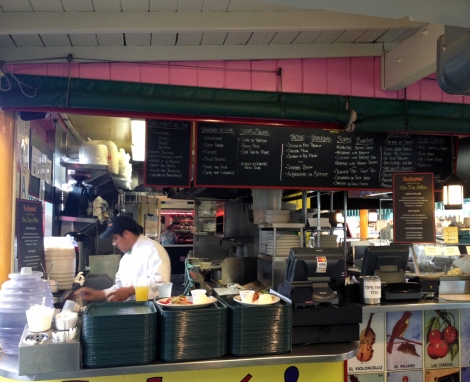 If you walk a bit further though, you’ll hit Lotería Grill. It’s a Mexican chain, but I was getting desperate. I hadn’t hit up a taco joint during my entire trip! I only had a few precious hours left so I opted to try at least a taco.

On the right, a mole poblano con pollo – chicken in mole poblano with to toasted sesame seeds, onion, and queso fresco. It was one of the better tacos I’ve had in my limited experience. I haven’t tried the mole at Tres Carnales but if it’s anything like this one, I’m sold – a rich, deep flavour with a good touch of heat. Joe ended up ordering one as well: the Cochinita Pibil, an achiote and citrus-marinated pork, slowly roasted in banana leaf with a citrus-pickled red onion topping and chile habenaro sauce. His was surprisingly tasty, although the shredded pork was a bit dry. Needed way more sauce! We both preferred mine. 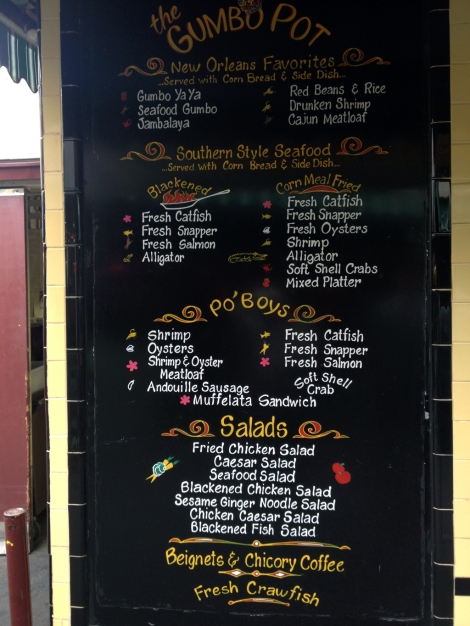 I had a burger place in mind for the afternoon in Santa Monica so I wasn’t expecting to eat anymore. Just wanted to take a quick (yet thorough) look around. When we passed the menu of The Gumbo Pot and Joe blurted out, “What’s gumbo?”, I stopped dead. What’s gumbo?! Oh no… the poor guy. So we ordered gumbo.

After ordering, Joe continued to talk in jibberish and asked, “What’s jambalaya?” as he looked at the pots in front of him. *FACEPALM* It was a shame he didn’t ask that first as there were two pots of jambalaya and only one pot of gumbo. The school of thought here would be the jambalaya was more popular. Another time, Joe, another time.

Our gumbo actually came out as a combination although we had asked for a smaller cup to try. The guy looked exasperated and said that was a side dish, the gumbo came in either a regular cup or a large. So we ordered the regular cup… only to be asked which side did we want: Creole mustard potato salad, sweet potato salad, lettuce salad with toasted pecan dressing, sweet potato chips, or collard greens. We went with the Creole mustard potato salad.

The gumbo was thick, full of spicy chicken, Andouille sausage, and shrimp. Rice and stock vegetables made up the remainder of the bulk. I thought it was pretty well done, although Joe compared it to Campbell’s Hearty beef stew. Maybe a bit more heat? Needed a kick of something. The cornbread was soft and made perfect for dipping. The mustard potato salad wasn’t the best, the pieces of potato a bit undercooked. For the most part, we both ignored it. 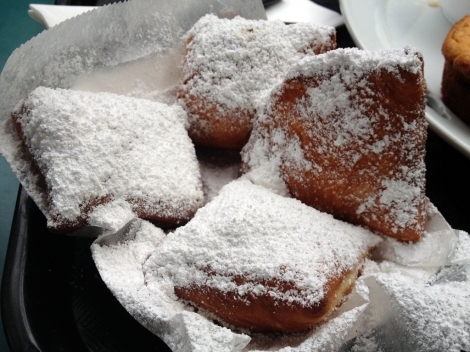 Although the menu was somewhat foreign to Joe, there was an item on there that was most definitely not new to him: beignets. Having tasted Wildflower’s and The Marc’s, we both were familiar with the French airier version of doughnuts. So, of course, we had to order some. They came out squared, and not as puffed up as expected. The plate was also doused in icing sugar – also known as crack cocaine to me. They were, indeed, airy on the inside, crispy on the outside. Worked for us! Add another southern meal under my belt!

This site uses Akismet to reduce spam. Learn how your comment data is processed.