Have no doubts that if I’m visiting a city as big as Los Angeles, I’ll be sure to do all the tourist-y things! First up was a day in Santa Monica, the beachfront city west of LA. 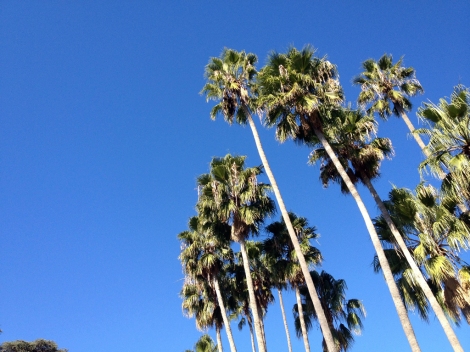 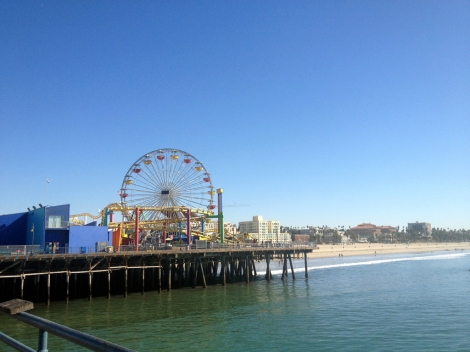 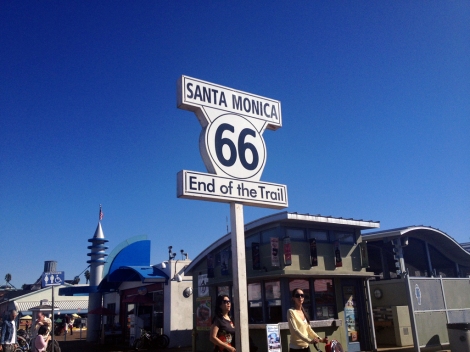 Taking only 20 minutes via freeway from where we stayed, we hit the west coast. The Santa Monica Pier is the main target, equipped with a Ferris wheel, a carousel, an aquarium, shops, and restaurants. It’s also home to the end of Route 66, the State’s most famous highway, stretching from Chicago to Santa Monica. 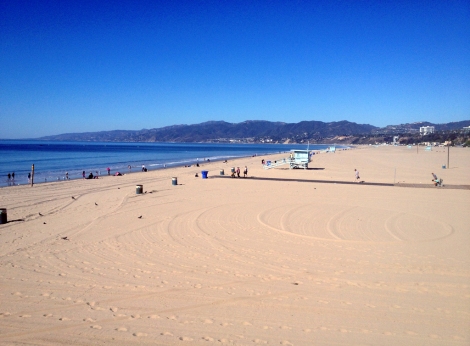 It’s only after you do all the tourist-y things that you can focus on the food… I’m just kidding. My focus is always on food. With two of my “must-eat” places sadly down the drain (one was closed on Monday, the other was a much further walk than I anticipated), it was time for plan C: just choose a place you recognize the name of and eat. Within the three-block radius of where we currently were, there was SUGARFISH by Sushi Nozawa, one of the many sushi places listed in multiple guides I read, and Jinky’s Cafe, a breakfast/brunch hot spot (celebs frequent here!). Both Joe and I aren’t big breakfast eaters, much less brunch fans. It’s a no brain-er that he chose sushi. Thank God he did. It is the best sushi of my life. Note: I have not been to Japan. Or Asia. Sad face.

Before I go on with my experience at SUGARFISH, please watch this short 5 minute video on Chef Nozawa, self-proclaimed sushi Nazi. After 47 years of experience, Chef Nozawa retired this February. His main sushi bar, Sushi Nozawa, closed along with him but the SUGARFISH locations still represent his name and his philosophy. If you haven’t watched the video, what’s his philosophy? I’ll let you read it yourself: 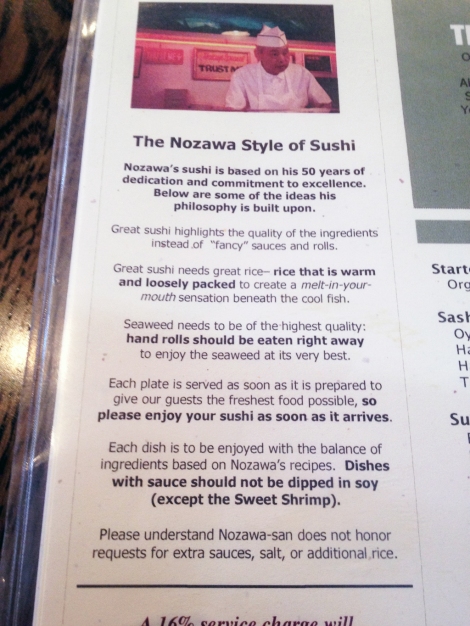 If he was present, there would also be no cell phones, no loud conversations, no requests of California rolls, spicy tuna rolls, beef teriyaki, whether you’re rich or famous, or just the average Joe. His style of sushi: concentrating on the purity of his ingredients. I know what you’re thinking. It’s plain. It’s a piece of raw fish on top of rice. Maybe a sheet of seaweed wrapped around it. Let me tell you, this was no ordinary sushi. Before eating here, I was all for my spicy tuna roll and special deep-fried dragon rolls. But after this lunch, I was fully converted. I need to go to Japan. 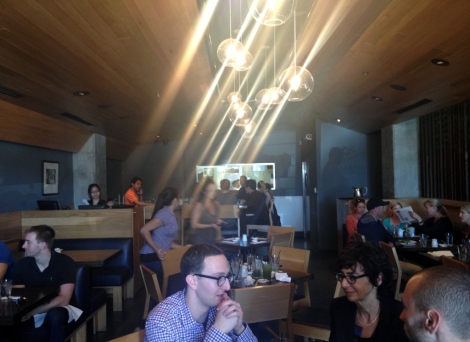 If the video or my words so far haven’t inspired you, then hopefully the food pics will! To be honest, I had little knowledge of what I was getting in to. All I knew was it a bit fancier sushi and it was on the lists of things to eat on multiple sources. The interior was packed with tables and booths, each of them filled. When we arrived at 1pm, there were only a couple of tables available. 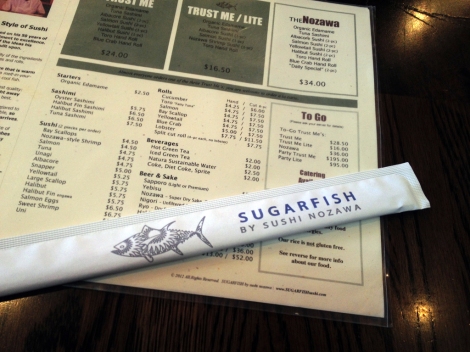 The menu, is designed in a omakase (chef’s choice) style but modernized. Chef Nozawa’s “Trust Me” concept is the most popular way to order, with a “Trust Me Lite” for those with a smaller stomach, and “Nozawa”, a larger menu for those who just can’t get enough. You can still order à la carte if you choose, but why would you? Just trust them! 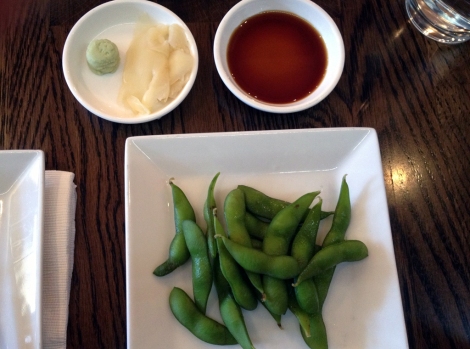 Organic edamame beans started us off. Lightly salted on the outside, you chew out the immature soybean out of the pod and discard the shell. Best snack ever! Should really bring some to work one of these days. 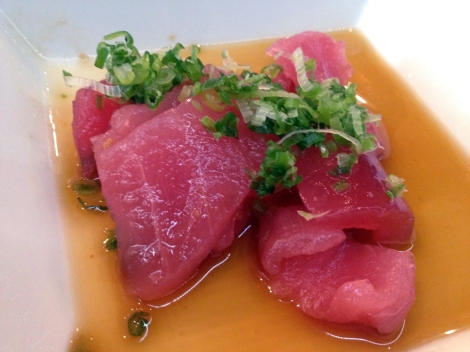 First fish dish was the tuna sashimi. With a freshly made ponzu sauce, this was the best sashimi I’ve ever had. And notice the color of the fish. There was ample lighting at our table so this wasn’t photoshopped. Pure, bright pink tuna. I’ve never seen anything like it. Topped off with finely chopped green onions, this was my favorite of all the dishes. 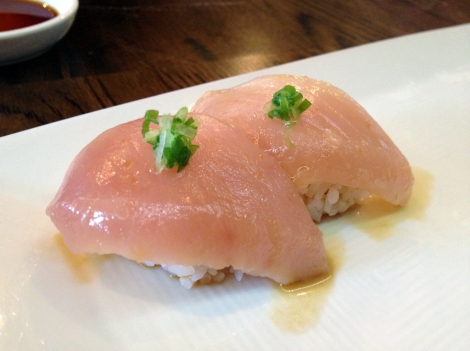 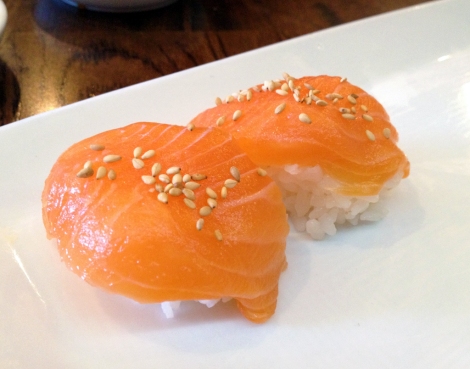 A duo of albacore tuna and salmon sushi pieces was our third dish. The albacore tuna was more mellow than the tuna sashimi we just had. Topped with toasted sesame seeds, the salmon was served plain, allowing you to dip into soy sauce if you chose to. 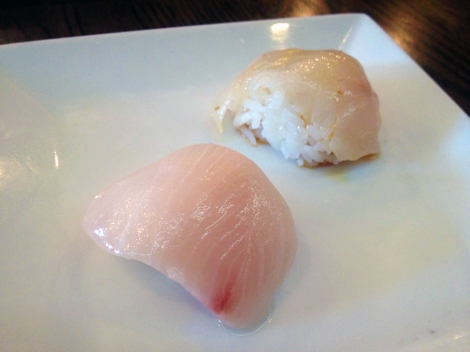 I had originally ordered the “Trust Me Lite” but after those dishes, I quickly asked our server to change it to the full “Trust Me” menu. I needed more of this! Halibut and yellowtail came out shortly. The yellowtail was not marinated in the same ponzu sauce as the previous sushi. This was a much stronger flavor, a nice pairing to a mellow-er fish. 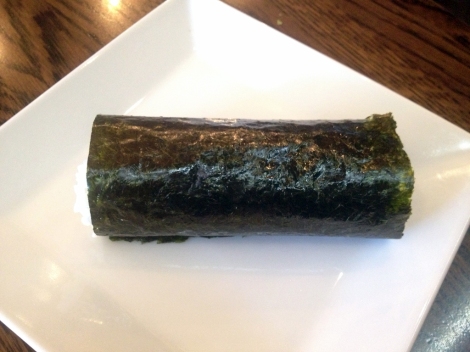 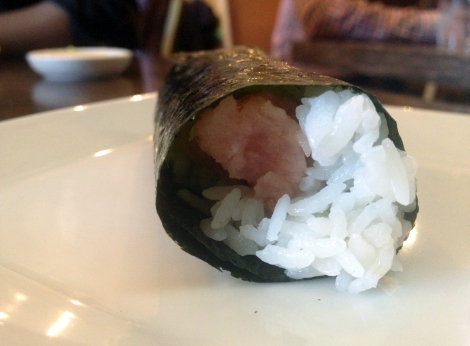 Our last pieces were rolls. The first was a toro hand-roll. Toro, fatty Bluefin tuna belly, is one of my favorite types of sushi. Think pork belly to pork, toro to tuna. Mmm, high fat content. The rolls were loosely packed and very fragile, definitely making it a handheld item. Even the sheet of seaweed tasted amazing, crisp and fresh. 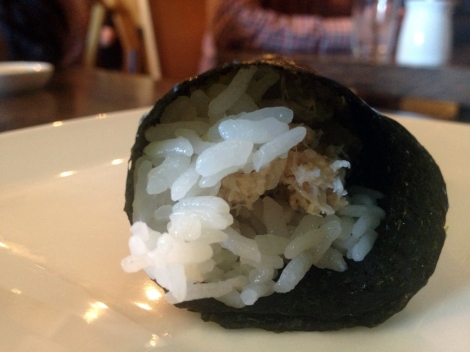 Last bite of the meal was a blue crab hand-roll. Not sure if it was mixed in with a bit of mayo but the crab mix was deliciously creamy. Like all the other pieces of sushi and rolls, the rice was served warm, and everything was loosely packed.
Are you convinced yet? Do me a favor, if you’re ever in the Los Angeles area, visit one of the SUGARFISH locations. You will not be disappointed.

Giveaway: A $30 Gift Card to BurgerWorks

Menya Yuzen: Why You Need To Try Gyokai...

I know this might be sort of a waste but… While in LA, did you go to any In-and-Out? Just saying! 🙂

But, back to the topic of sushi, it is sometimes a bit of an acquired taste for the +80% of the population (80/20 rule here). What is presented in the Western world as sushi might not necessarily be what is consumed in Japan, yet, what is consumed in Japan is not necessarily what people would be enticed to eat here. Otherwise, why people would order more rolls (i.e., the infamous California roll) instead of nigiri sushi?

Having said that, this place has been in my radar for a while but, alas, no trip anytime soon to LA. I don’t want to spend $$$ in Tojo’s in Vancouver but Shiro in Seattle is a good option. However, I am a bit surprised the omakase menu ain’t more… Aggresive (for the lack of a better word)? No unagi or a more simple tamago…

I didn’t! But I have tried In-and-Out while I was in San Francisco. I don’t understand the hype? Maybe because I didn’t have the “Animal Style” burger.

I was all for rolls and didn’t understand nigiri sushi at all. I’ve tried it numerous times but honestly, it was a piece of fish on top of rice. No where close to what I ate at SUGARFISH. But yes, the majority of Canadians/Americans will enjoy rolls more. It’s what we’re use to!

I haven’t tried Tojo or Shiro. I’ve always looked out for menus with a larger selection of rolls when I visit Vancouver. I read your omakase experience at Octopus Garden (I went there too, still have to post). It’s most certainly a different take on omakase. I only assume the “Trust Me” menu is less aggressive because maybe they can’t obtain those ingredients to their liking… higher standards, fresher fish? The a la carte menu didn’t have anything extravagant either.

But yes, if you’re down in LA, be sure to visit. They have multiple locations.

May I ask why you’ve stopped blogging?

The In-and-Out culture is based on the fact thier burgers are good, specially at their price point. And, yes, you HAVE to order them animal style. Otherwise, it is pretty much pointless.

Nigiri vs. maki/rolls: you don’t need skills to make a roll, plus you can “hide” a lot (such as lack of knife skills) in a roll. If I am going to fork $$$, it better be worth it! In the case of nigiri, what you see is what you get. The only bad part of nigiri sushi is that it is not “shareable”.

As for your last question, please, drop me an email. It is a lengthy one!

[…] After lunch, we rented bikes and made our way to the pier and down the trails. You can bike down the windy path and enjoy the beach on one side, and a market on the other. There’s always a ton of people biking, rollerblading, moms with strollers, runners, and even skaters hitting up the park nearby. […]

[…] our lunch at SUGARFISH, biking down the paths to Venice Beach, our pleasant find at Poke-Poke, Joe and I were ready to hit […]

[…] to replicate our past experience with nigiri sushi, we ordered a piece each of the red tuna nigiri. It didn’t have the same […]

[…] Since opening in 2011, Sushi Garden has long surpassed Zen as the best all you can eat sushi in Edmonton… or so I’ve heard. For my sushi cravings, I usually go to sushi restaurants: Ichiban, Kyoto, Sumo Sumo, or Yokozuna to name a few. Somehow I have managed to not visit either  all you can eat restaurants until last month and I must say, I was pleasantly surprised. Perhaps because the bar was set low in my mind, having tasted greater fare in Vancouver (drool) and the best sashimi and nigiri in LA. […]

[…] to not try restaurants there. Lately, I’ve had serious cravings for sushi and ever since my trip to LA, I haven’t been able to get the same fix. Sushi will never be the same! Good, yes, but not […]

This site uses Akismet to reduce spam. Learn how your comment data is processed.